I had the opportunity to talk with Dennis Schuermann, the owner of Wit’s Inn, about his establishment’s relationship with the surrounding neighborhood, why he believes the area at Canal Boulevard and Carrollton Avenue has become a successful “restaurant row,” and what he believes will be the effect of the new development in the area on the neighborhood and the restaurant row.
Wit’s Inn draws many of its clients from the surrounding neighborhood. Possible reasons for this include the recent trending of smaller, neighborhood bars that accommodate sports fans and serve food, as well as patrons’ desires to avoid DUI’s. As many of the people moving to Mid-City are post graduates, a large portion of the patrons of Wit’s Inn are between the ages of 25 and 40 years.
One of the reasons Mr. Schuermann cited concerning the reason he established Wit’s Inn in the location that he did was that he looks for areas with potential for growth. When Wit’s Inn opened in 1995, this area was not fully populated with restaurants; he believes that the success of his establishment, Venezia, and Brocato’s have possibly influenced the influx of restaurants along the row. Restaurants such as Venezia, Theo’s, and Dominoes that serve similar types of food, such Italian dishes and pizza, provide enough of a different experience to keep competition with each other lower than one would expect. Concerning competition between the restaurants in this row, the chain restaurants do not seem to significantly compete with the more local establishments, and there is a diversity of demographics catered to by individual restaurants; there are family targeted restaurants, 21 and over establishments, dessert and sweets focused shops, and restaurants designed for convenience foods.
Mr. Schuermann sees the development of the vacant strip mall as a potential positive for the neighborhood. He believes that the placement of new businesses could bring facilities to the neighborhood that might attract more residents to the area, and that Winn-Dixie will be a good competitor of Rouses. He does not see the food businesses that intend to open in the developing area as a severe threat; the area is not saturated with restaurants as is the Canal and Carrollton row. A major concern with the development is whether parking will be addressed properly. As the area is already over populated with cars, insufficient parking could hinder the success of the businesses. Citing bikes as an integral part of the Mid-City neighborhood, Mr. Schuermann is an advocate of developing more bike accommodations along Carrollton, such as bike parking and rest areas. He would also like to see the Lafitte Corridor extend to the other, less developed side of Carrollton. 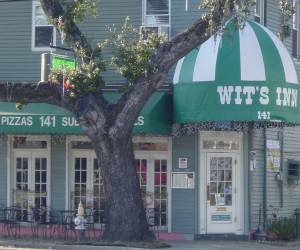 Situated on the corner of Iberville Street and N. Carrollton Avenue, Wit’s Inn is in the perfect location to grab a drink; the food is pretty good as well.  When Haley and I went into Wit’s Inn around 6pm on a Tuesday, we were impressed by all that this neighborhood bar had to offer.  It is a well kept bar and restaurant, arranged with a comfortable amount of open space and appropriately placed bar room games and attractions.  While there are tables placed in the front of the building that seem like they are used more for restaurant purposes, the bar tables that line the right- hand wall continue to the back of the room.  Each table has about four tall chairs and a flat screen TV docked to the wall.  There are two large, flat screen TV’s on either side of the bar that were showing a basketball game and an MMA fight.  Traveling towards the back of the room, a pool table is positioned in the middle of the floor, and a darts board hangs on the back wall.  Wit’s Inn has a pool league; interestingly enough, the building was a pool hall before Wit’s Inn established itself there.  Haley’s and my favorite amenity was the digital jukebox.  The bartender told us that people can choose what songs the jukebox will play by using a phone app, they don’t even need to get up from the bar!

Equipped with a well stocked bar and satisfying menu, the specials that Wit’s Inn offers are worth checking out.  Among them are a free beer with the purchase of a pizza on Monday, and a 3 for 1 drink special on Wednesday.  There are six beers on tap, of which, the most popular seem to be Abita Amber and Blue Moon. The service was excellent; our bartender was attentive and helpful when we asked to talk to him about the establishment.  While Haley and I were there, the crowd seemed to be mostly composed of polished couples who were headed to dinner, small groups out for a drink, and men who looked to be stopping by after work for a drink and some dinner.

Wit’s Inn was in business before Hurricane Katrina, but when it reopened, following the storm, a pizza kitchen was added to the establishment. While the food they offer is surprisingly more restaurant- like than I expected to encounter, it is somewhat over looked.  Alongside the pizza, fries, and sandwiches, you will find salads, appetizers, and seafood entrees. Haley ordered a salad, and I ordered a small pizza.  We would both eat there again.

It would seem that the Lafitte Greenway development has the potential to increase business at Wit’s Inn in proportion to the increase at the surrounding restaurants.  While we heard that they are trying to encourage more people to try their food, business seems to remain predominately around the bar.  In addition, many of the drinkers are stopping by at some point around dinner plans.  Whatever the outcome of the development may be, I will definitely revisit this tucked away bar, and I suggest it to anyone who is looking for a pleasant and entertaining night time outing.