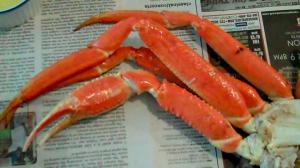 I dropped in to Kjean’s a few weeks ago to conduct a follow up interview with owners Kenan and Jamie.  When I had visited Kenan at the start of our project he told me about all the changes that were coming.  He told me that Veal Parmesan was being added to the menu and that he was on his way out the door to go and pick up daiquiri machines.  These were his new weapons in the crusade to battle against the affects of the BP spew.  I was eager to see how he was doing, as well as a little apprehensive about discovering who had thus far been winning the battle.

When I walked in the door Jamie was taking orders behind the counter.  There were customers in line waiting to be helped.  I could hear Kenan in the back shuffling fish.  There wasn’t a daiquiri machine in sight.  In short, nothing had changed.  Then I noticed the menu on the wall.  When I had first visited Kjean’s the menu had been unmarked, and now it stood as a testament to the affects of the spew.

Everything you see marked up contains shrimp which are no longer caught close by. Everything marked out contains oysters which Kenan can no longer obtain locally.

At first the prices had been marked up.  Everything that included either shrimp or oysters was raised in price by several dollars.  The menu looked like the sort that had been posted thirty years ago by chintzy owners who had Sharpie adjusted the prices as decades wore on.  The problem is, Kenan had had these new menus created just several weeks before the spew.  The story of how things went was most clear when I glanced at the oyster platter.   First it had gone from $13.95 to $16.00, then it disappeared entirely as Kenan’s oyster supplier closed his doors in early July.

I asked Jamie where the daiquiri machines were.  She sort of rolled her eyes and smiled and told me that Kenan does things on his own time.  I was a little disappointed, but then I realized that they didn’t seem to need them.  Business was strong, customers were in line, and Kenan was so busy that he couldn’t come out for an interview.

As I looked around the seafood house (it really isn’t a sit down sort of place) I noticed the counters that Kenan had shellacked with Saint’s memorabilia. When the Saints had won the SuperBowl, changing decor had been a priority.  It was nice to walk the counter and see the photos of our city’s most recent victory.

I also noticed that Kenan and Jamie have a sign hanging over the kitchen door that says “This House Believes”. As a New Orleans establishment that is still battling on, both post Katrina and post BP, this sign takes on a whole new meaning.  This establishment obviously believes in the continued success of New Orleans as a whole and as I see happy customers leaving with bags of crawfish to take home for parties, I can’t help but think that the spirit of believing is reciprocal.

One thought on “This House Believes”