Last week I met with Arthur Brocato, grandson of Angelo Brocato, who was the founder of now famous Brocato’s Italian Ice Cream and Pastry. Because Brocato’s is truly a New Orleans institution, I wanted to make sure that I was well informed on the history of the establishment before I met with Arthur. The Brocato family is aware that a glimpse of their history is sought after by many- over the years the family has been interviewed for food books and magazines, the Gambit, the Times Picayune and even curious college students on reporting assignments. The family has done an excellent job of providing a detailed account on their website complete with photographs to keep those who are curious in the know . When I met with Arthur, I had already done my research and I knew about the establishment’s history so I was looking for something more. Arthur provided me with a very detailed account of what “the row” looked like when they moved there in 1979 from the French Quarter (The account he gave is a story in itself which will have to wait for a another blog entry). Then, as Arthur warmed up to reminiscing, our conversation turned to the way Brocato’s used to be. He told me that when they moved to the Carrollton location his family lived in the back. He pointed out where his kitchen stove once sat before they moved out and expanded retail space. He then moved further back in time to tell me about how things were for his grandfather in 1905 when he opened his business on the 500 block of Ursuline Street ( not to be confused with the location founded in 1921 at 615-617 Ursuline which is now Croissant D’Or). 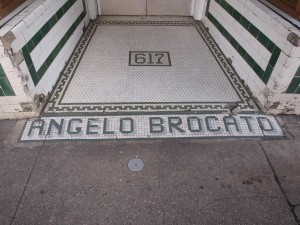 Sidewalk in front of the 1921 location at 617 Ursuline 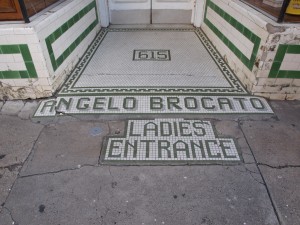 And Of Course...The Ladies Entrance at 615 Ursuline

He explained to me that the choice to make both gelato and pastries was one of necessity due to the extreme heat and lack of air conditioning in the French Quarter in 1905. Ices and gelato could be made from roughly Easter to October using copper freezers that were created specifically for the task. The freezer compartments needed to be copper because rock salt used in the ice cream production would react and eat through any other metal. Angelo started making his frozen treats early in the day and made one or two flavors daily. These he sold directly out of the freezers until they were sold out; nothing could be stored. If a customer came in for gelato, they got whatever Angelo had mixed that morning. “You got what you got”, says Arthur. Cannoli, on the other hand, were a wintertime treat. Angelo had no way to refrigerate the creamy cannoli filling which simply could not withstand the heat of a New Orleans summer. Arthur tells me that his grandfather’s first oven was coal burning and had no thermostat. Arthur demonstrates sticking his hand inside the oven and waving it around to test for temperature, a method he tells me he learned early on, working with his grandfather. Listening to the difficulties of running an Italian ice cream parlor in 1905 makes me appreciate the bustling establishment that Brocato’s has turned into. It hardly seems worth it to preserve fruit, cream and ice in extreme heat with no refrigeration, and yet Angelo never gave it up. Today, thanks to the modern wonders of air-conditioning and refrigeration, one can choose from an endless array of gelato and ice flavors, cookies, pastries, and cakes, all thanks to the vision of a Sicilian immigrant who wanted to replicate a little piece of Italy in the new place he called home.

One of five cases filled with treats at today's Carrollton location. 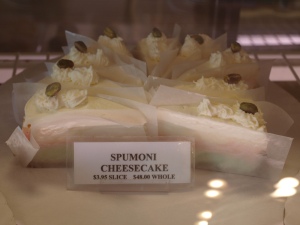 Spumoni Cheesecake! A great reinterpretation of a classic