Hello! My name is Jennifer Frerichs. Among the many attributes that makes New Orleans one of a kind are its restaurants and I will be exploring some of them. Although I am not a native New Orleanian and it was not the food that drew me here, it should have been. To my luck, I signed up for a class, taught by David Beriss, called “Applied Anthropology”. In this class, my fellow students and I were given an assignment called, “Restaurant Row Recovery.”

The goal of the “Restaurant Row Recovery” project is to analyze and interpret the transformations of the restaurants within a specific community. This assignment has given me the opportunity to study a small sample of the vast assortment of restaurants within New Orleans. More specifically, this project covers restaurants along the streets of Canal and Carrollton. Together, my partner Deyna Cimino and I have been assigned a quest for understanding of two locations, Venezia (134 N. Carrollton Ave), and Lemonade Parade (4709 S.Carrolton Ave). 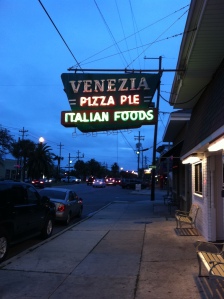 “Since 1957, Venezia Restaurant has been serving up piping-hot pizza pies and Italian cuisine at its best. Our staff averages 15 years of experience, and they are waiting and willing to offer you a memorial dining experience”

Venezia is well known for its family atmosphere and traditional Italian food. My partner and I were fortunate enough to interview the owner and a bartender recently. The enlightening resposes from the owner will be seen on our next blog. Since I arrived early for the interview that our group had established with the owner, I decided to have a seat at the bar and get to know the employees and customers. Starting with the bartender, I asked for the reasons he worked at Venezia. Apparently he has been working at this restaurant for approximately 5 years and he enjoys working with a company that is like a family, rather than working with a commercial chain. He also seemed eager to help me in my research, considering that he too was a UNO student, which I greatly appreciated. He explained that the effects of Katrina caused a lot of damage and resulted in changing some of the interior decoration of the restaurant. Unfortunately, as he began to descripe the history of Venezia in depth, our interview was cut short with the sudden rush of customers. As he walked away, a couple joined me at the bar and after they got their drinks, I decided it might be a good time to spark up a conversation. I started by asking them why they enjoy this particular restaurant. The man stated that he had been coming to Venezias for many years and him and wife always got the same thing and that was the “artichoke dip.”He also went on to say that he has established a relationship with the people working at the restaurant. I refrained asking much more as to not interfere with their experience. For me, the interviews emphasized both the quality of the food and the family atmosphere within the restaurant. It appears the family appeal of this place is what brings the locals back time and time again due to the comfort of the atmosphere.

“The bright exterior is a pretty good indication of what is going on in the inside. Like a cheerful clown, Lemonade Parade dispenses happiness to all who stop in.”

Lemonade Parade seems to exhibit a similar quality as Venezia, in its aim for “family atmosphere.”  From the outside, their art feels as compelling as an ice-cream truck and they remain very popular to a variety of different age groups. Unfortunately, my partner and I have not been given an opportunity to interview any of the staff, although we have tried to contact them through email and facebook. Due to these circumstances, we will likely have to depend on the history of the business, client opinions, as well as our own observations.

Before Lemonade Parade was in the picture, this location was held by a restaurant named “Manual’s Hot Tamales”. Manuals was founded in 1932 and its name was generated from the well known fact that they were popular for their tasty tamales. “For generations of New Orleans people, the sight of a Manuel’s vending cart at a street corner up ahead, lit by the dim glow of a railroad lantern and emitting aromatic steam on cold nights, was the embodiment of the peculiar regional version of hot tamales. Simmered in an oily slurry of drippings and tomato sauce, they were a far cry from the traditional Mexican tamales steamed in cornhusks” (http://wwno.org/post/tamales-today). Unfortunately, like many other businesses, Katrina inflicted too much damage for the restaurant to reopen. While Lemonade Parade does not serve the same tamales as Manuels, they still please the crowd with their own version of the snack. On review read, “ I love Lemonade Parade! What’s better than a cool, freshly squeezed beverage on a hot day in the neighborhood!? I love the simplicity of their plain iced lemonade, it usually never lasts the 3 blocks back to my house– it’s that good! They also have a wonderful selection of fun coffee drinks and smoothies named after New Orleans songs and events. Let me just say all in all, darn cute and tasty!” (http://www.yelp.com/biz/lemonade-parade-new-orleans-2). 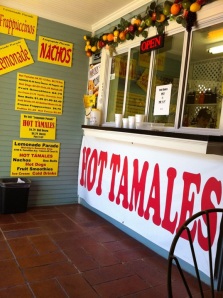 I believe this study should be guided by questions such as: