You know when you first meet someone you try to leave a good first impression?  You hope to make them laugh or impress them in some way.  You certainly don’t want your fly to be unzipped, say something offensive, or have spinach stuck in your teeth while saying it.  Well, when I first walked into Rue 127 I thought an XYZ was in order.

I had taken a couple of photos out front before heading inside.  I think the bartender spotted me taking pics and shot me a quizzical, if not displeased, look before I entered the restaurant.  My appearance was not that of your typical Rue 127 customer, as I was wearing a hoodie and jeans with my flat brimmed ball cap in my hands.  Welcomed by the same bartender with a cool, “Can I help you with something?”  I couldn’t help but laugh to myself.  It seemed a drink was in order as I began my field work. 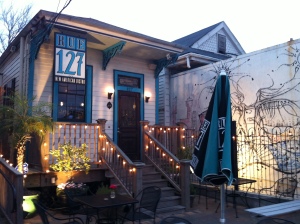 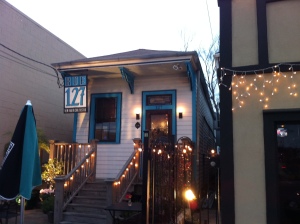 As an anthropologist, building relationships, establishing trust, and developing rapport is vital to the job description.  Needless to say there was some skepticism to overcome as I began to describe the nature of our project.  I explained the context of the research: first, as part of post-Katrina recovery and resiliency efforts; and second, in regards to the new business developments and expansions of the Lafitte Greenway.  I also assured them we were not reviewers and that our intentions were to benefit the community.  That helped.

I think it also helped that I ordered something other than my usual PBR.  I ordered a specialty cocktail and we began talking his specialty, specialty drinks.  That seemed to lighten the mood.  Cisco (the bartender, not the drink!) obviously took a lot of pride in his craft and of the place.  He also had just developed a completely new cocktail menu of his own design, including a new batch of lavender infused bourbon (he also does a bacon infused bourbon!).  I respected his craftsmanship and began to share a bit about myself and my personal history.

I am a new resident of the Crescent City, having moved here from Seattle some 7 months ago to begin grad school.  My previous occupation was as a high-end residential house painter.  Yes–interior and exterior; when it’s raining (which is often) we would work inside.  It was evident that there was great care and attention to detail in creation of every aspect of this restaurant. 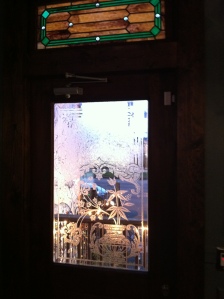 My first impression of Rue 127 was related to my construction background.  I commented on the level of craftsmanship unique to the front door.  It was the first thing I noticed when I entered; a detailed pane of glass decorating the beautifully stained front door.  Somehow these two things, sharing a bit of myself and complimenting the craftsmanship of the door, resonated with the employees and the skepticism vanished.  I was then whisked away from the bar by the hostess Ashley and given a tour of the restaurant.

With my background as a painter, she was eager to show off the painstakingly stenciled bathrooms.  The owner’s mother hand painted both rooms, including a Fleur de Lis homage to the Saints, the walls of which contained pictures of the Super Bowl championship run and signatures of the players. 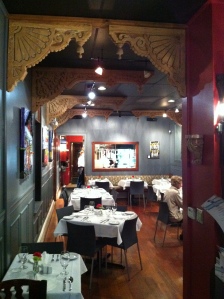 I wondered if, because I was an outsider, they wanted to impress upon me their southern hospitality and an authentic New Orleans experience, or if it was a simple connection of recognition and appreciation?  Regardless, I was glad to have this new rapport.

I thought of all the tiny things that go on behind the scenes in making a successful restaurant.  The personal relationships and community connections that have made up this restaurant row; the history of place and people, and the hard work and love that has translated into every morsel.  And I wondered what the future holds for this community and the future of the city’s cultural cuisine.  I may not be a native New Orleanian but my first impression is that this is a special place.  Rue 127, nice to meet you.